What message are they trying to send? That is the question my dear younger friend asked me recently. She sought my perspective on what she sees posted by Christians on Facebook. She asked if I follow and also believe the posts, or in the posts, that depict the opposing political party as evil. Opposing, as in, opposite of Donald Trump.

Another friend began a campaign to convince me that I am wrong in my political position. He knows I’m a Christian, and I guess he thought I was misguided. It was tempting to ignore his messages. I spend a fair amount of time learning what I can about our candidates, which is no easy task. The myriad of information, the sound bites, editorial biases, and then of course, spies or lies, doesn’t make it easy to unearth the truth. However, I had decided that Facebook would not be my source of information.

With a sincere desire to retain my friendship with this person, yet with exasperation, I addressed what I was feeling. I told him I felt he was criticizing me, and trying to convince me that he is right, and I am wrong.

That invited a real conversation. There was beauty in hanging in there, not running from the discomfort, but leaning into it, taking a risk, with an opportunity to share why my faith leads me in a different direction.

When I did that, he said, “But help me understand. I want to understand. As a Christian (he is not to my knowledge) aren’t you supposed to want the things that the Republicans want?”

Such a fair question. So much so, that I’ve asked myself that a million times. I have good good friends who feel similarly to him, and in a kind way, have tried to persuade me that I am missing the point. That it is not the person that they are going to vote for, but the policies that will further Christianity in our country. I could write a lot more about the concept of voting for the party policies and not the person, but I won’t do that now.

On one hand, their points are valid. Yet I can’t reconcile overlooking a person who represents so much division, when God tells us to “keep peace, if at all possible, as long as it is up to you. (paraphrasing).

I shared with my one friend who was looking for answers, that while I seek to obey God’s commandments, I don’t feel a responsibility to convince others that they should do the same. God has freed us of that, but he has not freed us from loving each other. It is his greatest commandment. And I believe the most difficult commandment. It’s not hard for me to not lie, steal, kill, and all the other things that upstanding people take for granted as acts of civil behavior.

But when we feel under attack, are rejected or hurt, or just plain don’t like what someone stands for, we are challenged to implement the love that God requires of us.

Yesterday I attended a Zoom conference hosted by George Fox University, with an author named Jemar Tisby, author of a book called, The Color of Compromise. He spoke to the incongruencies of Christianity and racism. It was in that lecture that I was introduced to the movement of Christian Nationalism. With all of the overt efforts by many Christians to convince everyone that we should vote for President Trump, because he will further the Christian cause, I did not know there was a name for this movement.

This mentality is what my friend is seeing, and why he’s confused. This is why my young friend who is seeking a better world as she raises her children asks, “What is their message?” Why are Christians sharing posts that mock people, and the next posts shout JESUS JESUS JESUS?

Jesus had this message (Matthew 22):

33 And when the multitude heard this, they were astonished at his doctrine.

34 But when the Pharisees had heard that he had put the Sadducees to silence, they were gathered together.

35 Then one of them, which was a lawyer, asked him a question, tempting him, and saying,

36 Master, which is the great commandment in the law?

38 This is the first and great commandment.

39 And the second is like unto it, Thou shalt love thy neighbour as thyself.

40 On these two commandments hang all the law and the prophets.

Jesus was, and in his Holy Spirit, is still our greatest example. He overcame the same temptations as we, and then was mocked, betrayed, and then hung on a cross for our sake. It is this love of my savior that strengthens me every day.

It is with him that I find my identity. I love my country, but my identity isn’t found in my patriotism. I am a new creature in Christ Jesus, not in President Trump, Joe Biden, or any other person. One day I will be in heaven, and people from all over the world will share in the glory of our heavenly father. The rich and poor, all races and all languages. We will have one thing in common; we will have all chosen to love and honor our creator.

The last thing I want to do is to contribute to the divisiveness we are all experiencing, in particular, with my brothers and sisters in Christ. I often resist the (strong) urge to post an opposing opinion on Facebook. Sometimes I’m angry, and sometimes I just want to shine a new perspective on an issue. But my better judgment tells me that I may be misunderstood, and as much I enjoy a live conversation, I don’t enjoy the bantering that turns ugly on FB.

My blog is my space, where I can share a little more depth than FB, and know that if you’re reading this, you’re reading it by choice. And, I thank you for reading!

Here’s to being salt and light of the earth, 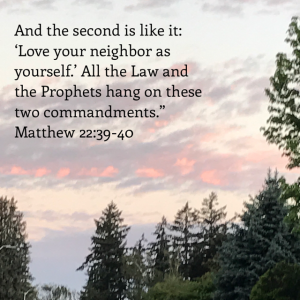 I finally made it up in time to see the sunrise. I love being up early, but getting up is another story!

I can’t shake the image of the video I saw of George Floyd. I was late seeing this because I had turned off the TV and extra social media for a couple of days in an effort to focus. Now that I have seen it, it’s definitely difficult to focus.

God did not say, “Thou shalt tolerate your neighbor.” He went deeper and further than we can imagine. He commanded us to love our neighbor as ourselves. When asked, Jesus said that all the law, and the prophets, hang onto this.

This is not love as we know it. We cannot grasp this kind of love without seeing it through the eyes of our creator. We get a glimpse of it in 1 Corinthians 13:1-13. We will begin to understand it when we practice it.

Tolerance is not enough.