On July 4th I shared my road trip / vacation and the book I was listening to on my way to Central Oregon. That four day vacation by the way was nothing short of heavenly. I don’t vacation often, primarily in an effort to preserve money for other things, like taxes in April. I don’t want to harp on a shortage of income. It’s true I need more of it, and I’m persistent in looking for opportunities to increase it, which is also something I don’t want to expand on publicly. Although, I did share a dog walking story in an April post. It was that story and more like it that caused me to stop that side job. While I wish I had more income, or maybe I should just say money, I don’t necessarily stress over it.

Maybe because I’m intentional with it. One day I might spend a fair amount on a meal with a friend, but rarely do I pick up food to go. I can be starving at work because I didn’t take time to make a lunch. Rather than run to the store, I’ll eat lemon heads and pound down more coffee or water. Better yet I’ll hope someone appears with a baked treat from New Seasons. Admittedly this isn’t a preferred strategy of a healthy person. By the time I get home I’m famished and chips and salsa are calling my name, if not some ice cream, and that’s before dinner. I’m spending some extra money on the wedding I didn’t plan on, but that is with joy and hope that Bridgette’s wedding will be magical. I might spend a little bit more on a Mother of the Bride dress, but rarely do I buy new clothes for everyday wear. So there you have it: intentional. And here’s to hoping intentional continues to replace stress when it comes to money.

Speaking of magical, that is what I call Timothy Keller’s book: Belief in an Age of Skepticism – The Reason for God. The messages in this book penetrate first to the mind, and then steep deeper into the heart, which feels like magic. It’s not that this never happens as I listen to my local pastor (whose messages I love). But Timothy Keller shares perspectives on the issues of skeptics that admittedly, I accept easily. I’ve been blessed with faith in God. While I get frustrated with Him, I hardly ever question His existence. His presence in my life has been so tangible, I can’t deny Him. 1 Peter 3:15 says “… Always be prepared to give an answer to everyone who asks you to give the reason for the hope that you have. But do this with gentleness and respect,” Don’t you just love that last part!? I think some people overlook the tail end of that passage.

My story is filled with God’s faithfulness and expressing my love for God is usually as easy as breathing. I felt expressions of God all around me in Central Oregon; in the mountains, the rivers and lakes, and when the sun rose and when it set. 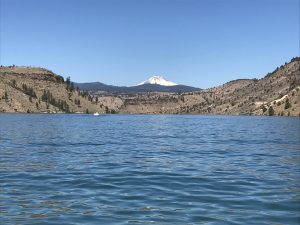 But this is my interpretation of God, and Timothy Keller bases his interpretation on intellect and his passion for the truth. As a result, he has studied many religions and philosophies. I love and appreciate this passion and grateful that he has shared it with us. The ease of faith that I possess has rarely ever challenged God. During my dry spells when I didn’t walk with the Lord (which is when I made pivotal junctions) I continued to believe He loved me. I was simply ignorant and didn’t walk the path he’d laid out for me. There might have been more to it than ignorance, but that was definitely a component.

I was mesmerized throughout the book as Timothy reveals truths and addresses those who do challenge God. He does it with a tone of acceptance and love toward the unbeliever, as well as the believer who thinks they’ve got it altogether. Unlike me, he has been a skeptic, and his empathy toward the one who questions God is apparent.

I recall two instances in the book that touched me deeply.

One is in Luke when the rich man dies. From afar he sees the poor beggar named Lazarus who used to sit outside the gate, hoping for a morsel of food. In Hades, the rich man is tormented while Lazarus lives peacefully next to Abraham. The rich man begs Abraham to send someone to “the other side” to warn his brothers, so they too will not die and go to Hades. But Abraham says the following:

‘They have Moses and the Prophets; let them listen to them.’ The rich man urges, “‘No, father Abraham,’ he said, ‘but if someone from the dead goes to them, they will repent.’

But Abraham replies, ‘If they do not listen to Moses and the Prophets, they will not be convinced even if someone rises from the dead.’” Luke 16: 29-3

I’m reminded of the many times I read God’s word, but don’t heed His instruction. I think back to when I took what I call my detour, leaving the path I was walking to do things my way for awhile. That’s when I made decisions based solely on my own, without praying or consulting with Him. Things didn’t go so well, and in fact, they went horribly. That’s not to say that those decisions couldn’t be redeemed, but it would have been a lot easier to go the speed limit. I’ve renewed my walk with God, but in this world, I am paying the price.

We also do this to each other. Somehow we don’t hear when someone is hurting, or needing help. We nod our head in agreement, but we continue on our way without adjusting our step in their direction. When my mom was dying I told friends she was in the hospital and the difficult time I was having. I’d shared that she’d had a toe amputated and I was in a position to decide if we would amputate her leg. If we didn’t, she risked death. A dear woman from my bible study held close to me during that time as I made the difficult decision not to amputate. I knew my mom didn’t have the stamina to care for herself after such a severe loss. When my mom passed, friends asked why I hadn’t told them she was “that” sick. I’m sure I’ve done the same, half listening to someone, not getting it. Just like I often don’t “get it” when I’m reading God’s word.

As parents we laugh about this (or not). We ask our child to take out the garbage and they don’t respond. We ask again and they still don’t respond. Then we raise our voice and they wonder why we’re upset. “I’m not upset! I just want you to hear me!” I’ll bet God wanted to say the same to the rich man, but God doesn’t yell.

I thought about the rich man and his desperate attempt to adjust the course of his brothers, and his own life, and I was overwhelmed when I thought about the good fortune I have that I’m still living with the opportunity to do God’s will, and be more than a rich man, I can be Joni.

Keller points out that the rich man was simply, “the rich man.” He had no name, but the poor man had a name: Lazarus.

“Dear God, let my name mean something. That I will be more than the girl with the nice yard, or the devoted mom, or the good food or the conscientious employee. May these things that are important to me not define me, but may I keep perspective and may my name, Joni, reflect a woman who is faithful to God.”

The second moment of revelation in Timothy’s book was about forgiveness. For anyone who has been hurt or betrayed, that word can send pricklers up a back or tears down a face. Forgiveness is complicated, especially if one continues to be hurt or betrayed in some way. It’s a personal conversation with God that is ongoing, and if you are at least having that conversation, you’re ahead of the person who resists forgiveness. For me, it’s a constant conversation. However, I’ve had a shift.

The subject of forgiveness came in the context of why Jesus had to die on the cross. Apparently some people like the concept of God without Jesus having to go through the unimaginable experience of being crucified. It’s like, “Lets just have a nice God and call it good.” As Timothy explains it, I now understand forgiveness in a completely different light. Without repeating the complete context, ultimately forgiveness is paying the debt for someone else. As I read this, this sounds obvious in the Christian sense. But what I thought was obvious, wasn’t the whole story. Keller illustrated a neighbor who broke a shared fence. One neighbor pays for it, entirely. He completely forgives the debt. THAT defines forgiveness. I swear I’ve never considered forgiveness in the extreme like that, and it has made a difference for me.

Forgiving a broken fence is a lot easier than forgiving betrayal or broken hearts. But Jesus knew both. In the garden of Gethsamane, Jesus’ anguish is palpable. He says, “Going a little farther, he fell with his face to the ground and prayed, “My Father, if it is possible, may this cup be taken from me. Yet not as I will, but as you will.” In paying the debt there will be excruciating pain, but in honoring our heavenly Father, we get to sit with Lazarus in heaven.

As I think about disappointments or a relationship that didn’t go the way I’d hoped, I am enthusiastic in wanting to pay the debt. If I am to truly share the Spirit of God, I can only do it if I am not holding on to a hurt that I’ve experienced. I am taking that hurt from that person and paying for it. They don’t owe me anything for it. There’s no negotiating. Not as my will, but His will be done. I’m paying for the fence.

I wonder, will I feel this way tomorrow, or the next day, or in a couple of months when a new hurt presents itself? I’m on the right track. It’s been a week!

So, that is my book report on The Reason for God. I purchased the hard copy and hope to find more of these magical moments when I read it versus listening to it. I hope you will magically know the Spirit of God in the most beautiful unexplainable way possible. And this might be the book to do that.

By the way, my grilling skills are improving and I might be able to give a tutorial on using a charcoal grill in the near future. 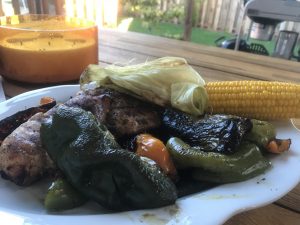 A Lily, and Horton Hatches an Egg

Coming up for Air
0 replies