This last weekend was exceptional, except for when it wasn’t. Saturday was a day I wouldn’t trade for anything, but most of Sunday I would give back. I’d worked hard on Saturday so I could budget time for reading and writing on Sunday afternoon, but my refrigerator decided to demand my attention instead.

On Saturday, I got to spend the evening with my daughter and her boyfriend having dinner in downtown Portland. Coincidentally it was the famous Starlight parade night. As a Portlander, I should have known that, but I hadn’t paid attention to the schedule. We ate outside on this perfect summer night where there wasn’t a hint of humidity or breeze. Roads were closed and police directed people and traffic. After dinner we walked among the throngs of parade fans sitting roadside, content and patient, waiting for the next segment to reach within their viewing space. This perfect evening finished when I came home to my son and a couple of friends using the fire pit in the backyard. That would seem fairly ordinary to most families, but my son doesn’t live with me. The simple sight of seeing his car in the driveway as I approach my home gives me more pleasure and satisfaction beyond what I can articulate. A “yes!” like I just hit the 8 ball in the designated corner pocket sometimes escapes my lips.

Sunday started out perfect, in that I went to church, knowing that afterward I would be making my son lunch; another “yes!” This was planned, but nevertheless, I don’t take it for granted. As I was frying up some bacon I noticed another large leak of water on the floor near the refrigerator. I’d cleaned one up the previous night as well. I really hate things like this. In fact, one could say I’m a baby about things like this. The night before I put a towel down, and when the water was all absorbed, I put the towel away and hoped that meant there was no longer a leak. I didn’t (wouldn’t) look at the floor early Sunday morning before I left for church. My plans for the day didn’t include a refrigerator leak. I know what a leak on the floor means. It means I am probably not going to get to read and write like I’d so carefully planned for the afternoon and evening. Finding time to read and write is like digging for treasure. Not that I’ve ever dug for treasure, but I imagine you have to carefully map out a plan. Then there’s a lot of digging and tossing out things that are not the treasure. I do that in trying to mine some time for this luxury. I plan and organize with TO DO lists. I tackle them, also addressing the surprises that emerge. Those things that are legitimate, yet threatening my prize: uninterrupted time to read and write. I knew exactly what a leak on the floor meant, and I was as annoyed as heck.

After a measure of denial, and in an effort to not call my very good friend’s husband who has become my reluctant “go to”, I called one of my sweet neighbors and he came over. The bottom line is that both men ended up working on the refrigerator. I hated asking, yet I also hate contacting a random refrigerator repairman, not having a reference of any kind. I’d felt like I had held these two kind men up at gunpoint. I know it’s not easy to say no to someone who needs help. I knew I’d had a treasure planned for my afternoon and I hated knowing that I’d interrupted whatever treasure they might have planned for themselves or their family. I was crossing my fingers that their afternoon plan was something along the lines of preparing an earthquake kit. See; I am a baby. I’m not happy with my attitude either, so that’s another reason for giving Sunday back.

After that small rant, I’d like to share two fun things. One, in my recent book review I completely forgot to include a very favorite book that I recently listened to (the number of books I listen to is an indicator of the amount of yard work that I do). It’s by Anne Lamott called: Small Victories: Spotting Improbable Moments of Grace. If I could be a fraction of the writer Anne Lamott is, I might be able to make just enough extra money to supplement my day job income and meet my monthly expenses. The second fun thing I want to share is the month long bike challenge finish.

Small Victories is a collection of personal experiences Anne shares from her own life about friends and family, many of which include misunderstandings and interpretations she’s had along the way, exposing truths about herself and others. She is vulnerable, bold and courageous, revealing flaws and selfish ambitions, relatable to many of us. But we nod our heads in agreement in the privacy of our own home. Anne narrates her failings like she’s giving directions, unflappable and matter of fact, in a most modest posture of normalcy, for all to read. Her faith in God is firm, yet she approaches him in a stance of curiosity and frustration that He often doesn’t do things the way we would like Him to. While we read about her foibles, I’m reminded that humility (outside of love) is the most God like characteristic we can possess. Above all, Anne is funny. 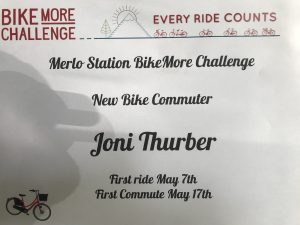 The May Bike More Challenge is complete. And, our school staff did it! “It” being that our cycling staff (which now includes moi) beat one of our local schools that is known for being an athletic power house. Jesuit High School is a private school in our athletic conference. All of us public schools love to beat (and we mostly like to play them) this school. The school where I work is a small option school in our district that doesn’t have athletic teams. So, for our staff to have beat this particular school was a fun twist for me, having attended many a game between Jesuit and the school my kids attended. To read more about how my new biking hobby evolved, click here.

Thank you once again for reading!

Why We’re Desperate for Good Dads

Pieces From the Past Couple of Weeks

Jesus Showed up at the Hospital
0 replies