There aren’t many opportunities for me to write about eating disorders these days. The day-to-day pre-occupation that clouded my days are gone. There was a time that I didn’t even fantasize about a time like this. I hoped and worked toward Bridgette’s full recovery, but I discovered early on that there were no quick fixes. Most days we plodded along in a trance, obedient to the treatment plan, Bridgette as the patient, me as the mom who helped keep her accountable. Some days we plowed through the junk that suffocated us, grasping for fresh air. 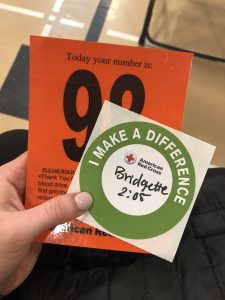 Her healthy body giving life to someone else.

While the memories are solidly imprinted in my mind, I don’t linger there. But still, I don’t take anything for granted. The most ordinary developmental behaviors and experiences of a teenage or college age child were elusive for a long time. This year I am celebrating Bridgette’s senior year of college and her experiences. And today, we had a first. Bridgette was able to give blood.

Bridgette has been interested in giving blood since her early years in high school. But since her eating disorder started at 15 and lasted until this last year (with intermissions), her weight never qualified her. In high school she managed the school wide blood drive twice and thrived at managing the event. She was invigorated at the concept of the Red Cross and what they accomplished for so many people.

Today she saw a blood drive being promoted on a street corner, and then saw a couple of friends who were working at it fulfilling volunteer hours. As she made pleasant conversation with them she settled into the old mentality of which she’d become accustom. She didn’t consider she could donate. But suddenly the light bulb went off and she realized that, yes, she could donate blood! Her schedule has been stretched as of late with school and work.

But for this she adjusted her schedule for the 1 1/2 hour appointment and did what she hadn’t yet ever done. She gave blood, and saved 3 lives, as she pointed out.

I would never wish that another parent walk the road of an eating disorder. But it’s true that when something is elusive we appreciate it more. Oh what a bloody good day. Sorry to use my weird sense of humor on this!

Each Day a New Cup

The Day After and Idina Menzel

Why We’re Desperate for Good Dads