How can so much happiness occur, two days in a row? Again, it has nothing to do with the typical things that produce happiness. Well, that’s not completely true. Food does typically make me pretty happy. But this is about more than food. It’s about using a piece of equipment at will, and achieving success. There’s a theme in these last two posts: use equipment and it works like it should. That makes me happy. 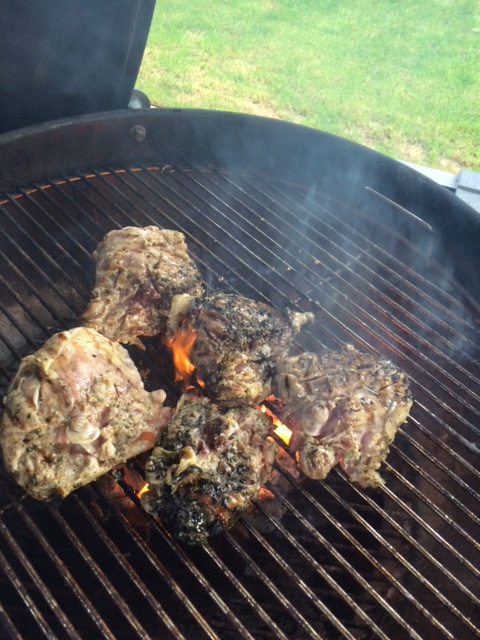 I’ve had a charcoal BBQ for two years. The gas one died, and I didn’t want to deal with propane.  Bradley helped me at first with it, but since he’s moved I haven’t been successful with my attempts. I don’t know what guardian angel decided to tap me three times and grant my wish, but I’m happy about it. I longed to be able to come home, throw some charcoal on the grill, and cook me up some meat. My last birthday request from the kids was to teach me how to do it. My copy cat attempts from You Tube were failing me, so I’d hope my kids would be more successful. They must have decided that buying a gift was easier than figuring out the trick to a charcoal BBQ, because they didn’t come through with my request. I’m not complaining about the gifts I got, though. Bridgette’s got a great gift for gifts.

So, here is my success. And yes, it tasted as good as it looks. See below for my tips that I’m HAPPY to share. 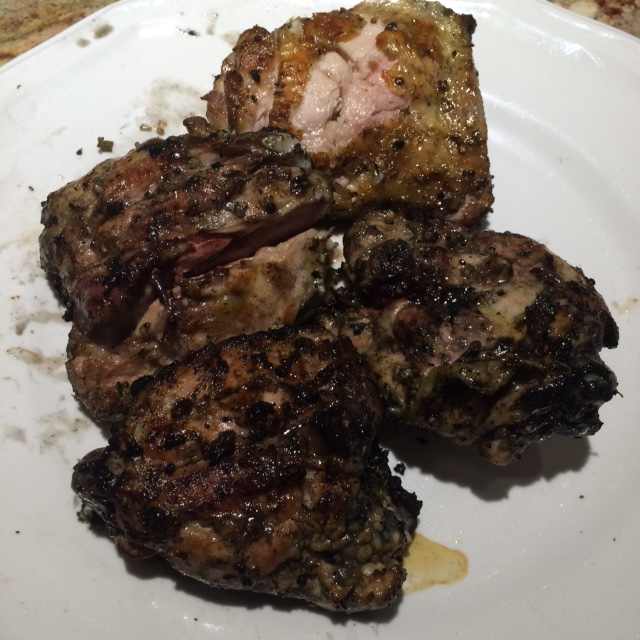 Build the briquettes in a pyramid (got these instructions right off the bag). I purchased a cylinder when I bought the BBQ. It was recommended and I know a lot of people like them. But I wasn’t successful with it so I decided to do what the bag says.

Douse with BBQ fluid, about 10 seconds, placing it all over the briquettes. Don’t ever put the lighter fluid on top of burning briquettes. I’m not just saying this to protect myself from a lawsuit. I really believe it’s not a good idea.

Light the briquettes… light more than one. I lit as many as I could. The flame starts slow, so it’s not a problem to do this.

LEAVE THE LID OFF. The briquettes need oxygen.

Check on it in 15 mins or so. At this point I moved the briquettes around a little bit. I checked in 5 or so minutes, then spread the briquettes in a single layer (again, off the bag), but touching each other. I blew on them, to stimulate some flame. I’m not sure if that helped or not. It was a still night, so I decided to give it a little kick with my breath.

The fire seemed a little slow to get hot, so I placed the lid on, with the vent opened all the way. Remember, it needs oxygen. That seemed to get more flame going. Soon there was smoke, and I removed the lid, placed my chicken on the grill, and let ‘er cook. Flames began to ignite because of the drippings, so I played around with it, flipping the chicken occasionally. When the flames got too big, I returned the lid, and kept the vents open. That seemed to reduce the oxygen, but gave it enough to continue cooking. I really just watched it back and forth with lid on and off. In between I weeded my yard and talked on the phone with Bradley. I love to multi-task, and since I could smell the chicken cooking, I was feeling very accomplished.

I used 5 chicken thighs. I like ALL chicken. Mostly dark, but if white is cooked so it’s not over cooked, I like it, too. I put the pieces in a Zip Lock with about 2 T of olive oil, some garlic mixture (2 T?) I found in my cupboard, and half a lemon squeezed. I rubbed those all together while in the Zip Lock and voila (my computer doesn’t have the French accents), and that was it!

Book Reviews and My Garden

Vacation at Home – A Heavenly 12 Days