I didn’t get to expand nearly as much as I wanted in my post, Paying Off Debt. In my effort to share some solid financial insight from Phylicia, absent was my own feelings about money, and how it fits in my life. Money has been a struggle for me much of my life. When I was growing up, money was scarce. Money and material things eluded us and I don’t remember thinking much about money, the absence of it, or the absence of anything. There was no confusion about it, because it didn’t exist. There were no extravagances about which I had to reconcile. If there were Christmas gifts, they were donated to us, but I don’t know from where. We never belonged to a church, even though my mother was very religious. One year I received a Barbie doll wrapped in newspaper. That wouldn’t have been the end of the world, but I recall the instant I realized that the Barbie doll was used. Her hair wasn’t golden and didn’t fall straight down her back. Instead, it was sparse and wild. Nor did she come with any clothes. I don’t remember feeling another gift as distinctly as I remember that one.

As I got older, and I was in a foster home, things seemed much brighter, and more confusing. Christmas in my foster home was a big big deal, and a real thrill. With no less than eight kids in the home at a time, and every child designated at least five gifts, the tree overflowed with colored packages that glistened and summoned my name. But none of the packages bore anyone’s name. They were color coded, and because we weren’t allowed to rummage around under the tree, it was easy to pretend the whole inventory under that tree was for me. We all undressed those gifts with our eyes. I recall willing a pair of culottes, or a David Cassidy album to be my gifts.  I’d gone from not anticipating anything to having high hopes for specific items on a wish list.

As a young adult I got myself into deep trouble with a couple of credit cards. And, as an older adult, I got myself out of deep trouble from those credit cards. I recall vowing to pay off the credit card that had maxed out at $10,000. When that happened, I planned to reward myself with a dinner at what was then called Atwaters, atop the 30th floor of the U.S. Bank tower in Portland. I imagined sitting at a window table, overlooking the city, enjoying a medium rare Rib Eye steak, proud of my accomplishment.  But when I made that final payment to the credit card company, a $50 meal had no appeal.  I probably treated myself to homemade fried chicken, mashed potatoes, peas, and gravy, enjoying an episode of 60 Minutes. That was an ideal Sunday night for me.

I could have paid the $50 for a meal in an esteemed restaurant. But I’d learned that my income didn’t support such an expense, and I was living a lie if I pretended it did. That issue is really at the crux of my decision making now. It’s not so much about the money that is spent on something, but it’s the amount of money I’m spending, in proportion to my income, and my giving. When banks consider lending money to a borrower, they call it Debt to Income Ratio. What is my debt compared to my income, and does it make sense for me to increase my debt, based on my fixed expenses, like my home, a car, insurance, healthcare, my kids, etc.?  I can ask the same question of myself that the bank asks if they are considering loaning money to me. Unfortunately, banks didn’t do a very good job of this formula several years back, and a lot of people received loans that shouldn’t have. This mentality influenced decisions that were made in my marriage and contributed to a catastrophic outcome.

When we encourage our kids to purchase items that exceed their income (or even ours), it’s creating a habit that could be very hard to break and we’re delivering a very confusing message. They don’t have the financial demands they will have as an adult. It’s easy to spend their babysitting money or our money on anything they want, when they don’t have the obligations of supporting themselves. But if we can teach them now how to live within their means, we’re helping them avoid the prison so many people face (as I did, when I had a $10,000 balance) of being held hostage to debtors.

Not only do people become hostage to debtors, but bad credit closes doors, and good credit opens doors.  Six years after my divorce, I was able to eek out a good enough credit score for a lender to take a risk on me so I could buy a home. I pay a premium for that risk, by paying a higher interest rate than someone who has a more impressive credit score.  With every mortgage payment I make, my credit is improving.  The bad credit score I inherited from my divorce stifled my ability to buy a house in the conventional sense the previous six years.  Finally after six years and now a few months of paying a mortgage, things are improving.  A good credit score is purchasing power.  A bad credit score leaves one feeling powerless in their ability to move forward regarding the big decisions, like a car, a home, and insurance.

I do believe it’s a confusing time in American culture. People often refer to the simple life of people in third world countries, and the happiness that people experience without the material things and conveniences we take for granted. I believe that’s true. But I don’t think third world country people face the decisions that we do every day, to have or not have, to buy or not buy. They simply live the life they’ve been handed, while we’re trying to live a life with values of a third world country, within a first world country economy, complete with award winning marketing strategies. It’s a lot to reconcile.

Possessing beautiful things isn’t bad. But debt isn’t of God, and when we live outside of our means, we aren’t living within God’s will for our lives. Proverbs 22:7 says “The rich rule over the poor, and the borrower becomes the lender’s slave.”

Proverbs 22:26-27 says, “Do not be one who shakes hands in pledge or puts up security for debts; if you lack the means to pay, your very bed will be snatched from under you.”

I know first hand the truth of that. I recall a friend who lived in a very modest home and was frustrated at what she didn’t have in comparison to what others did have. On the other hand, I was intensely envious of her small home, with a husband who refused to spend outside of their means. At the time of that conversation, she had a home and I did not. My bed had been snatched from under me. 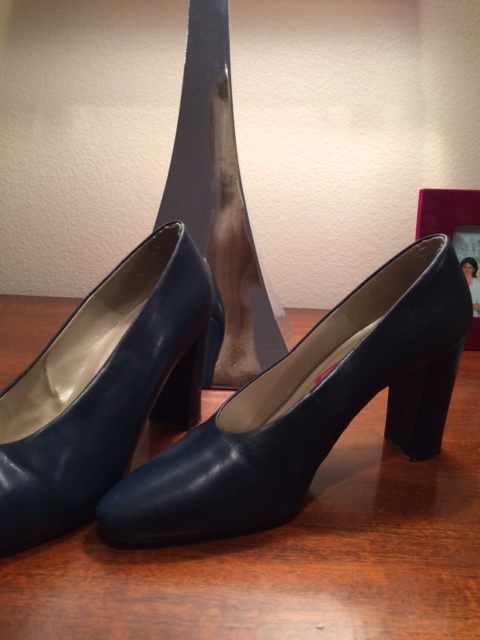 I paid $9.99 for these at Goodwill. They were the perfect compliment to a blue and burgundy striped top I wore with some black slacks.

Bradley gave me a compliment last summer that surprised me. “Mom, it makes me feel good that you are careful with our money.  It makes me feel safe, like we’re not going to run out or anything. You could pretend that everything is the same and act like we can do whatever we want to, but you don’t do that.”  The reason I was shocked was because Bradley has criticized me for being cautious and using coupons, or insisting on getting deals on something before I make a purchase.  When he’s been critical of that, I’ve been defensive and frustrated that he doesn’t understand that it’s not being cheap, but rather prudent.

Bradley had been watching me. So much, that at times, it caused arguments and frustration.  We weathered the arguments though and another message emerged.

I don’t want my kids to think I’m cheap. I want them to get a thrill out of a new piece of clothing or event. But I mostly want them to understand that we spend, we save, and we give, what we have. We don’t spend, give, or save what we don’t have, and it’s not because we’re cheap. It’s because no matter how cool those new shoes look or that purse feels, we’re living within our means. What they practice now they will practice when they are on their own or raising their own family. And their children will learn from what I am teaching my children. I think that’s how it works. I’m praying!

On Being a Girl

The Day After and Idina Menzel

Day 10 of My Twelve Mugs of Christmas