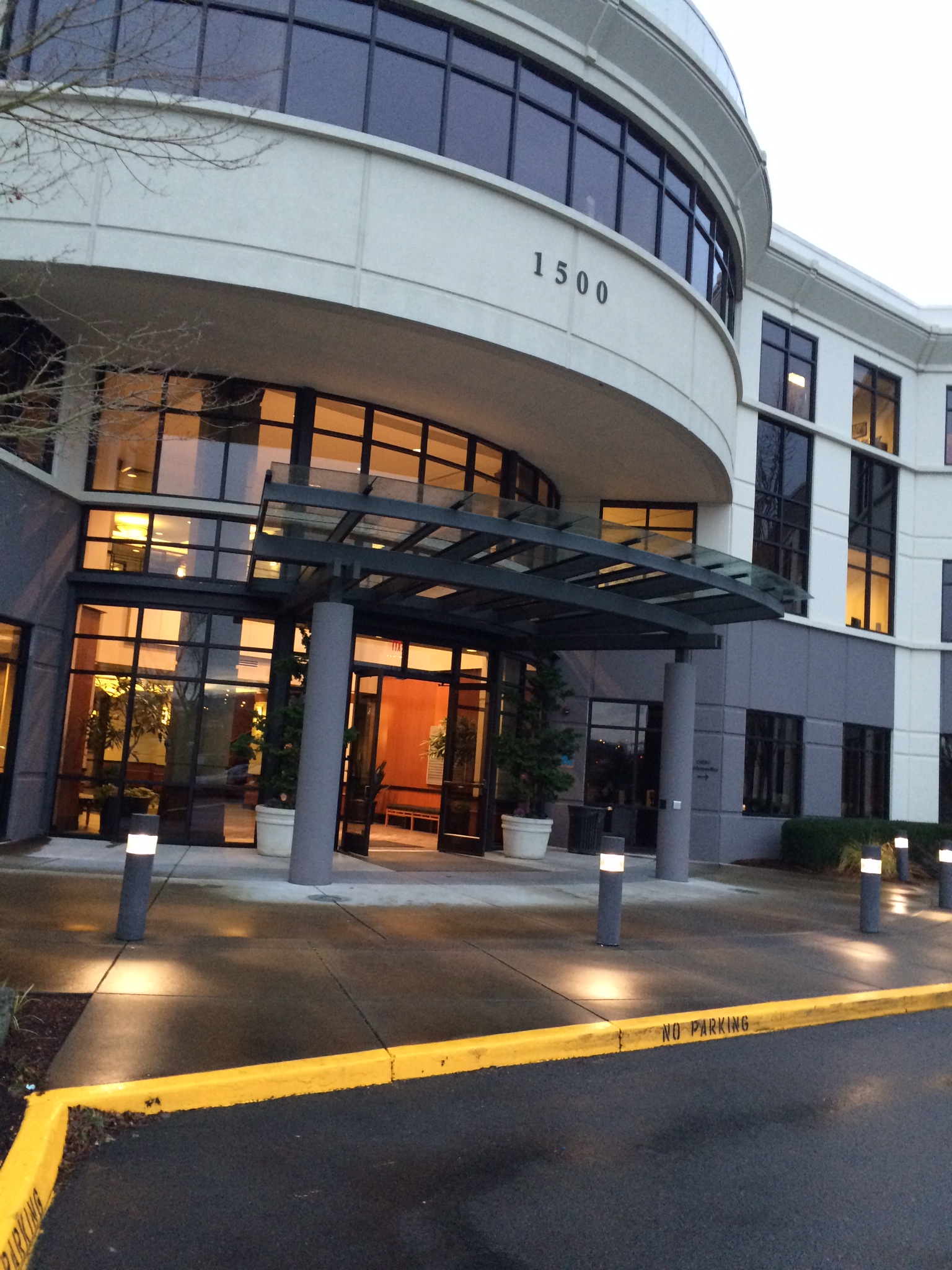 The building where I work. It’s especially pretty early in the morning.

Yes, I took the State Insurance Exam on Friday.  After my last blog post it was determined that we would be taking the test for certain on Friday at 3:30. Both the other gal who was hired and myself were concerned about this, and our concern increased as the week went on. The pre-testing quizzes were taking us a lot of time between the site not cooperating and having to take the tests over until we passed. There were about 40 quizzes, about 8 of them had 50 questions each.

I can’t tell you how foreign the whole insurance vernacular was to me, and my comprehension was equally shallow.  So much seemed like legal jargon. Everything I read made me wonder what I was getting myself into. The quiz questions were complicated. “Johnny, an uninsured motorist, let Joni, an insured motorist, drive his car from Oregon to Kalamazoo, but before she left, he told her not to fill the tank with unleaded fuel. Joni hit a telephone pole when she was talking to Johnny on her cell phone to tell him that she forgot to use Premium gas. Joni also broke her wrist, and reported to the emergency room after the car was towed. Who is at fault and will insurance, if any, pay for Joni’s broken wrist and Johnny’s car?” For a literal thinker like myself my head spun in circles and triangles, all. week. long. The class we had taken the week before was directed solely at learning the material so we could pass the test. We weren’t allowed to ask questions, so we madly took notes, with little understanding of what the notes meant. I had to have faith that I would figure things out in the end. I had to ignore the little voice that didn’t believe it was possible. I had to eat more chocolate.

I had an ongoing QUESTIONS sheet of paper.  When we went over it with our boss the Thursday before the test, I had figured out the answer to most of the questions I’d written down. For example, I kept hearing the term, “a covered auto.” My literal thinking brain was working over time.  When I heard the term “a covered auto,” I figured that the auto was covered, as in a protective material or something. I envisioned an auto fitted nicely with a heavy fabric.  It didn’t take me long to figure out that a “covered auto,” is an auto that is covered by insurance. So passing the pre-exam quizzes that were stated like trickster questions was a long arduous process.

The test was at 3:30. I finished my pre-exam quizzes at 4pm the Wednesday before the test. That was a team effort between my co-worker and myself. Once those were done, that gave me only Wednesday night, Thursday, and Friday morning to read the 175 some pages of written notes and try to not only memorize and digest insurance: Property and Casualty, Auto, Homeowners, Ocean and Inland Marine, Workman’s Comp. I was frantic, barely taking a break to go to the bathroom, and when I did, I read my notes on the way to and from, and kept my notes in site while there. Multi-tasking at its finest. This week Bradley was on his own and there was no Farkle.

Friday at noon I picked my fellow employee up at her house.  One minute I was speaking words of peace and encouragement, the next minute she was comforting me. I wanted to cry; I wanted to be done. It wasn’t so much that I felt I had to pass to impress my boss. He was adamant that we shouldn’t stress about passing the first time, that it was common for people to take the test over. I simply wanted to pass so I could move on. I wanted to go to the bathroom unencumbered. I wanted to make a meal for Bradley and play Farkle. I didn’t want Bradley living with an absentee mom, present, but not really. I didn’t want to be a hermit behind an office door, with a singular focus.

My fellow employee and I got to the test site about 3 hours early to get finger printed and then to have lunch while we studied and put the finishing touches on our brains (thank you, boss). We wondered how we could possibly make a difference this late in the game. But we knew that we could pass or fail, by one question, and neither of us could bear the thought of that. I needed to pray before my test one last time. I wanted to pray in union with someone. It wouldn’t do to mutter a final prayer under my breath, so I muttered to Jesus that he would protect me from embarrassing either myself or my new friend, and I asked her if she had a faith. Her answer was longish but clear: She shared enough and I asked her if we could pray. As we drove back to the test site I asked aloud if God would reward us for our hard work, and that his will would be done, and that we would relieve ourselves of the pressure we had put on ourselves. AMEN.

I was surprised when I finished the test with an hour left. I had the opportunity to go back over my questions. With that much time left, I considered it, for fear that I was foolish not to. I went back about five questions, but then decided I wasn’t going to do it. I knew what I knew and that wasn’t going to change. Going back might sabotage my results. I hit the SEND button that indicated I was finished. The test calculated for a minute. I looked at the screen and saw the word PASS. I was stunned.  I bowed my head and thanked Jesus, truly in disbelief.

I walked out of the testing room, beaming.  The proctor congratulated me and showed me my results. I passed by O-N-E question. I am certain it was God’s hand that allowed me to pass it, by one question. Every second I shoved that information into my head paid off, but I know my heavenly father was looking out for me. He knows my limitations, and I was stretching them.

It was with great relief that my co-worker also passed. She passed by more than one. We had articulated our concern about one passing and one not. We were both thrilled to celebrate our successes with a quick drink. We went our separate ways; I went to the high school basketball game. My friends indulged me while I beamed and expressed myself gleefully.

Both kids are away at a church camp. Bradley’s a camper and Bridgette is serving. The weekend was mine. After church today I went to Ross Dress for Less to see if I could get a couple things for my work wardrobe. I really hate shopping. I love clothes, and I love to have clothes. But I don’t like the process of getting clothes.  But I couldn’t pass of up the sales. I ended up purchasing $189.00 worth of clothes (16 items!). I made it home in time for the end of the third quarter of the NFC Championship game. I’m so glad I stopped shopping when I did.

So… I have my Insurance license. I do understand what an umbrella policy is (we had one when I was married, but I didn’t understand it), I know what my deductible is, I know what Homeowners is, I understand the concept of Commercial General Liability…

Now, on to learning my job!

Spared From a Different Kind of Heartache