This weekend was a Christmas weekend in every sense.  Bridgette and I got to go downtown and watch the Christmas tree lighting ceremony.  Unfortunately, Bradley wasn’t with us (he was with his dad), but we had fun singing Christmas carols, loudly, with our friends we met down there, we drank a Starbucks Red Cup holiday drink, we unexpectedly got to say hello to a good friend who happened to be downtown as well, and we did a little shopping, too. 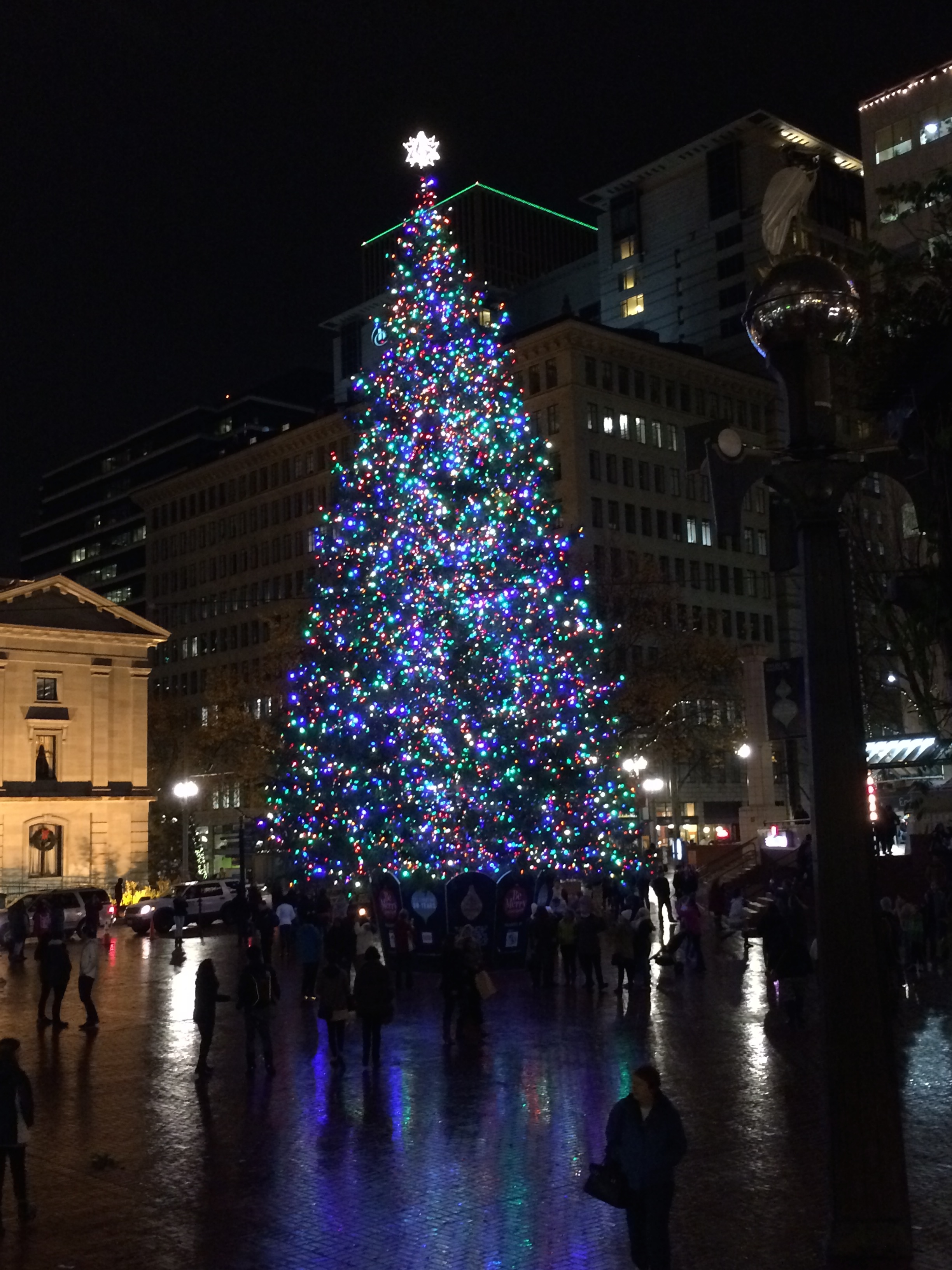 I don’t remember doing that downtown Christmas thing last year, or even the year before.  Maybe Bridgette being gone, then coming home for a few days was the impetus to get us downtown and do what thousands of other Portlanders do.

I began decorating the house today. I love love love decorations at Christmas.  Bradley and I pulled all the boxes out of the attic and I knew right away I’d be having to donate a good amount once I decorate this house. Like our furniture I’ve struggled to figure out, I’ve got more decorations than I have house.  One minute I find myself mourning the loss of a particular item, the next minute I am convincing myself why I must shed it and be done, move on, and get over it.  But it’s a constant conversation, rarely eager to put that “thing” in the give away pile.

One of the tubs is marked “Banister.”  We don’t have a banister.  I remember the banister garland with fondness. I’ve used it for three houses, and since the kids were toddlers.  I had spray painted pine cones royal blue and added blue glitter. Those were put on garland with red cardinals.  I looked forward to putting that pine cone and cardinal laced garland up every year, knowing that I’d be battling the kids’ efforts to remove the birds from the garland, as they went up and down the stairs. Last year in the small rental we skipped the garland too, but I held out hope for another banister in our future.

With our new home, permanent decisions are being made left and right.  There are two main rooms to decorate. It’s good, and it’s hard.  I have an anxiety that when I give these things away, I’ll also lose the memory of them. If I could be certain I wouldn’t forget, the loss wouldn’t feel so significant, maybe even desperate.  I forget a lot of things at age 54.  So it’s very possible I’ll forget what decorations I used on my banister, or what wreath I hung on a door, or how I only used sparkly candles in the black candle stands.  It’s something with which I have to come to terms.

So, the house is a mess. In part, because of the quantity of stuff, and the lack of storage space, and in part because I’m a messy decorator! 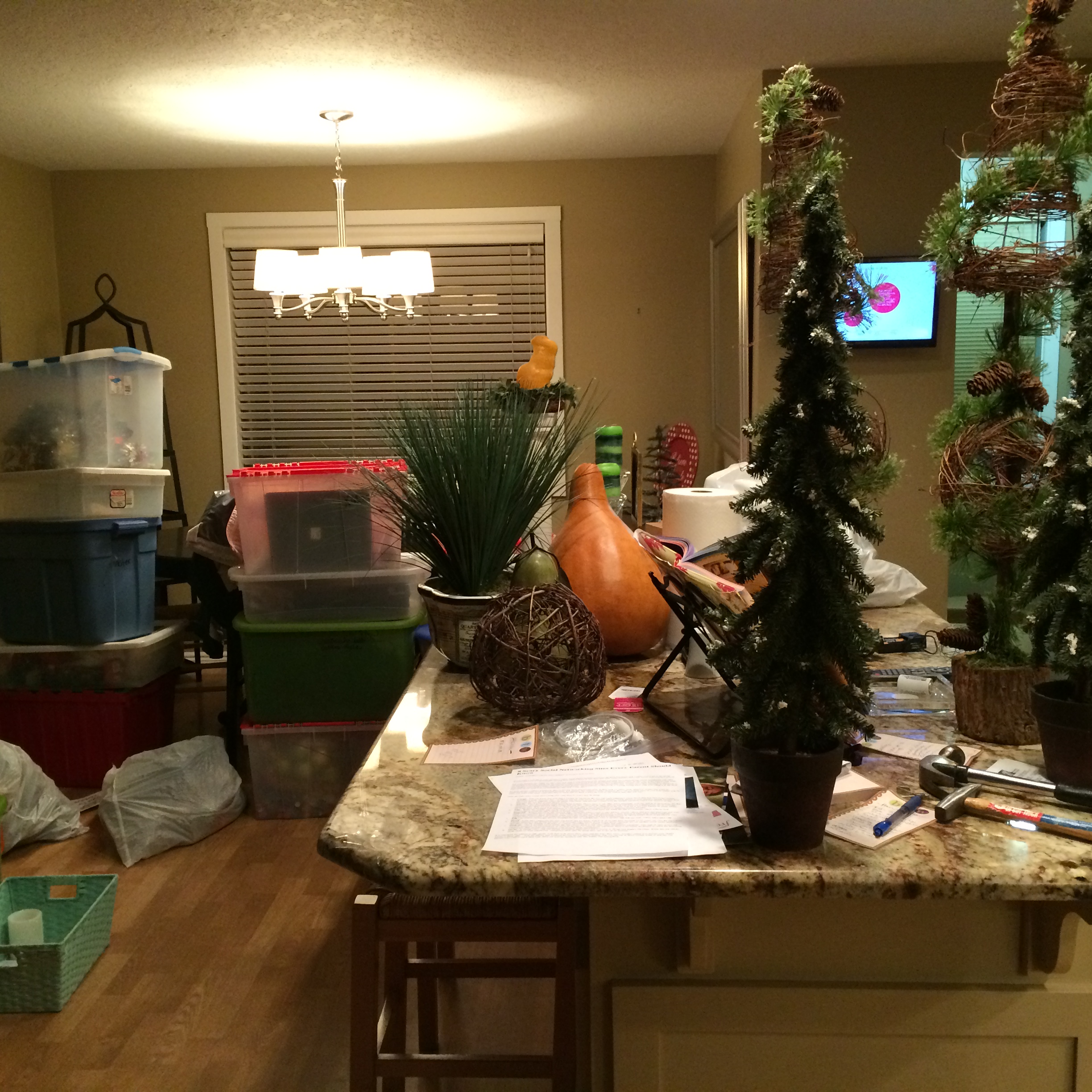 But progress is being made. 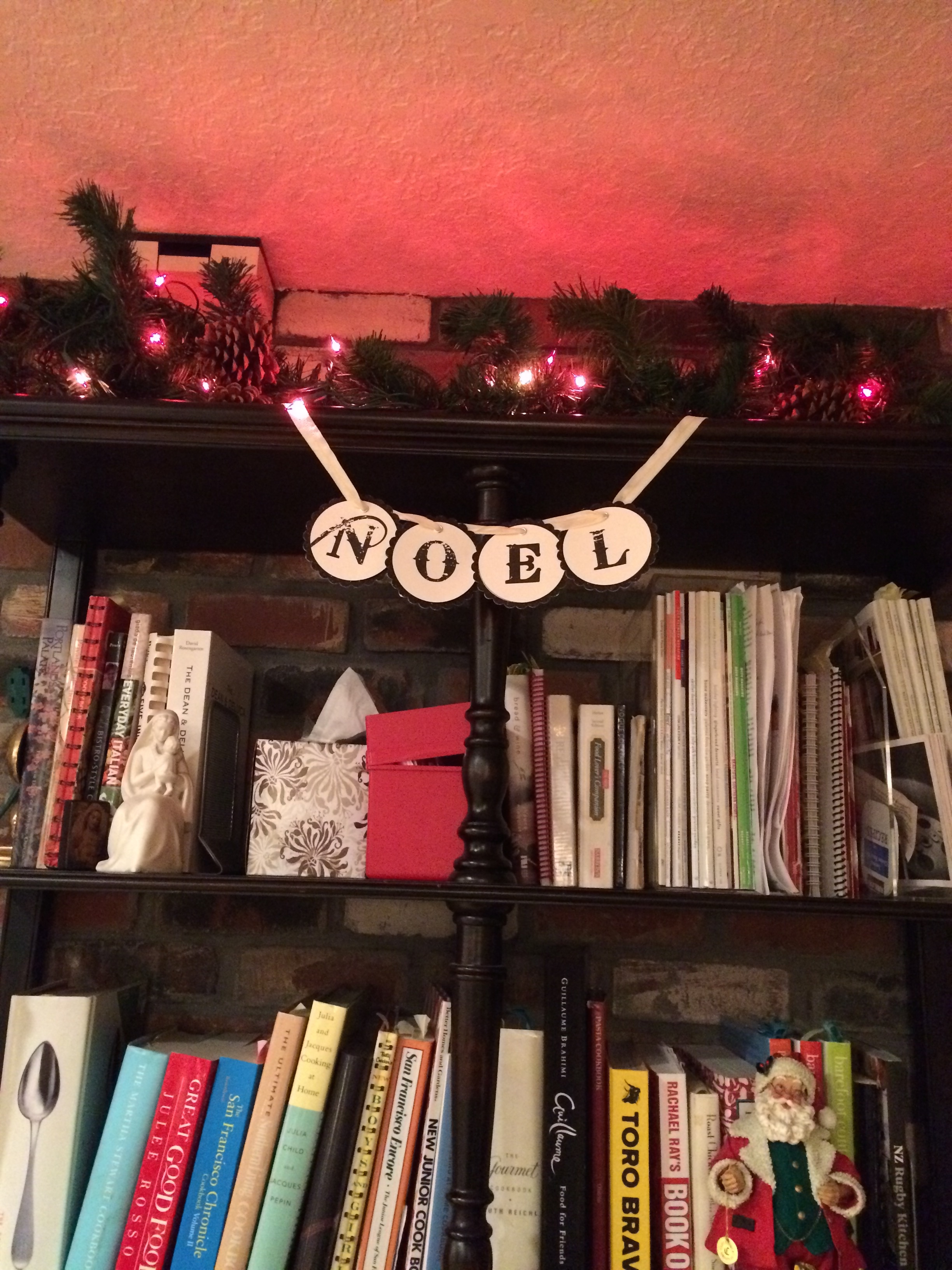 I love lights. I considered making my life easy by putting Christmas ornament balls on top of the greenery that had been up there before. But I figured out a relatively easy way to get the Christmas sparkle ignited, which is ultimately the way I like it.

This morning a friend’s husband came over and installed shelves above my washer and dryer in the garage.  It was a true gift.  I am so grateful for those friends who loan me their husbands for a few hours.  He also secured a coat hook that I had incorrectly installed in Bridgette’s room a few days ago, and he hung a picture.  I watched, hoping to remember what he did.  I’ve been hanging pictures for years, but there are times I hold my breath and after a few weeks, I’m happy when nothing comes crashing to the floor.  I still have a few pieces of art that are beautiful, meaningful, and valuable. I don’t like to risk them on my picture hanging abilities.  To hang the picture, he used this device that I’d used once before, but had forgotten.  I think it’s called an Incredible Hook. 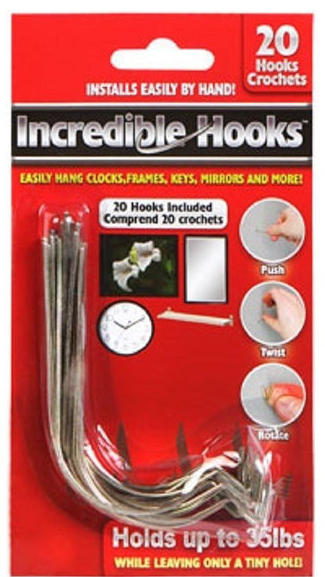 Incredible Hooks…sounds more like a description than its name!

But it is incredible. It makes a small hole, so even if one makes a mistake, it’s not a hole that’s going to horribly scar your wall.  Speaking of other things that I’ve discovered. I am a sucker for apps on my phone. One that I just discovered is called Sleep Pillow.  I generally have NO problem falling asleep. But the other night I had this funny instinct to listen to something enjoyable while I went to sleep. I wondered, “Is there an app for that?” And sure enough, I came across this app, and I love it.  I don’t want to become addicted to it, so I’ll have to watch myself. But as I turned off my light, chose my white noise of choice (rain and thunder, waves splashing up on a shore, creek water), and set the timer for ten minutes, I snuggled my pillow tightly with a smile on my face with my new discovery, and an image of being someplace special.

And that’s what I’m going to do right now.

Adios was Better than Grief

What’s Your Cause?
0 replies